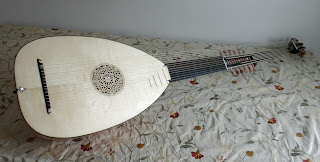 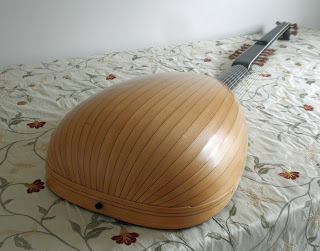 This small Theorbo has a comfortable flat back yet just a wide as other theorboes is also referred to as a Theorbe de Pieces in d' or Lesser French Theorbo, or even a 'Luth a Double Manche (according to B.Narvey). String length 75.7/121cm, or 75.7/160 with a longer Italian theorbo neck as may have been on the original. Can be strung as 7 single strings with 7 single basses, 6 single fingered with 8 basses (as current, mostly gut some Nylgut), or 6 courses double strung and 8 single (as on the original instrument)

This instrument may have started off life as a Bass lute, the neck on this instrument is narrow for a theorbo so may be the original Bass lute neck. The extended neck is more likely to be a conversion by a French lute maker like DesMoulins hence it's strung as a Theorbe de Pieces. However some early short necked, large bodied 'small' theorboes survive that are said to be original short necks, possibly tuned at standard chitarrone tuning in a' but at Paduan/Venetian Pitch (466Hz or 456Hz, according to E.Segerman 2008) possible at that higher pitch due to the shorter string length of 75.7cm but still justifying a double re-entrant stringing. It's a shallow theorbo at 15.5cm deep as seen below: 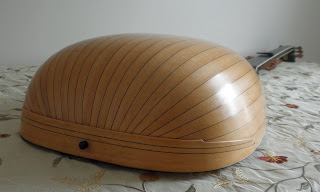 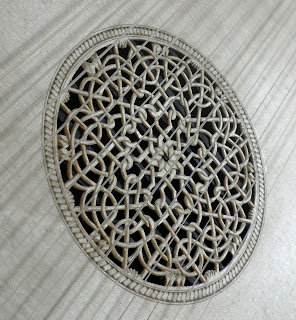 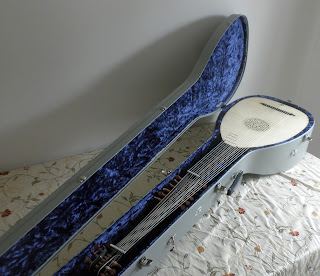 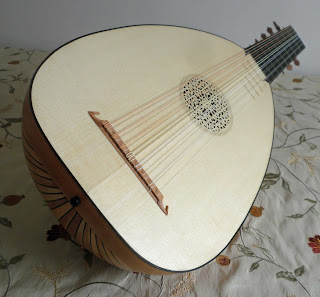 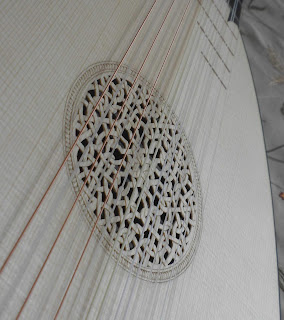 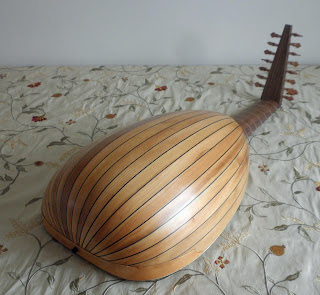 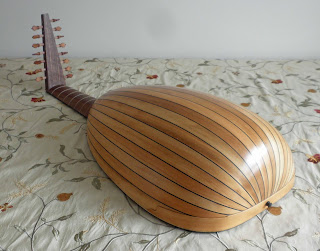 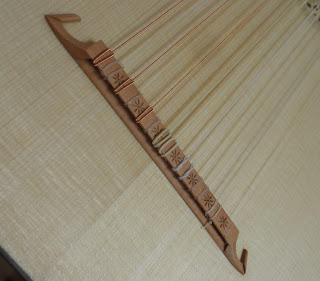 Originally inspired by the look, shape and sound of the Sixtus Rauwolf lute played by Jacob Lindberg, it was created to give the look/feel of an original instrument. With a multiribbed yew body with old dark and lighter heartwood, one small rib restoration (thus a reduced price), and with a slightly darker/'aged' finish elsewhere, hopefully it's got the ambience of an old/original instrument, dare I say!
It has a Black Walnut neck and pegbox (as recommended by the Mary Burwell lute Ms) and is cheaper than a veneered neck, less ebony too, the fingerboard is black English Bog Oak an eco-alternative to Ebony, the only ebony used is around the soundboard. The pegs and bridge are pearwood with decorative stars carved as seen on another original/ surviving lute by Giovanni Hieber ( Brussels MIM 1561). The original rose design, shown here has a roped border, typical of this type of renaissance lute. 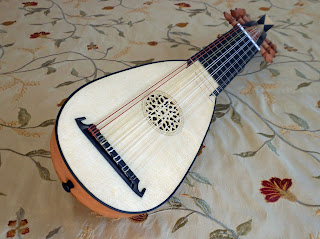 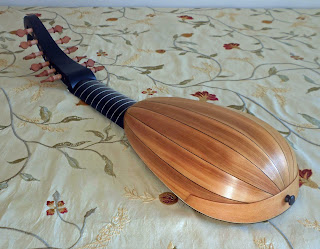 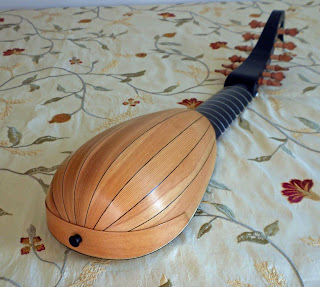 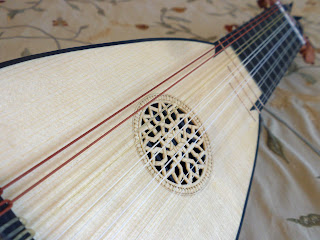 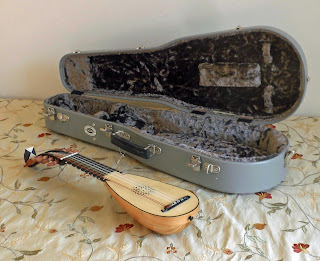 The latest addition is this Mandolino with 6 courses as ordered previously. The original instrument is in the Paris Cite de la Musique No E.0702. The original is mostly in Ebony and Ivory so I made this one out of Yew wood inspired by the Burkholtzer made before with heartwood yew, the rose also has a roped border. The neck is ebonised maple and the peg box ebonised limewood with natural pear wood pegs. The decorative headstock is made of holly and ebony like the original. The intention was to create a venetian lute feel for the mandolino. The case is an oversized case but was bought as left over stock from Kingham and used for this instrument, it can be bought without this case but it does a good job at protecting it and small enough, the instrument can be bought without the case too.


13crs AND Angelique in one, based on Maler/Elg 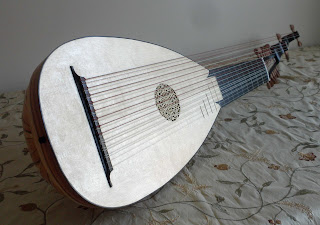 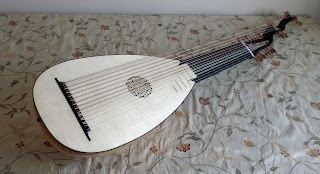 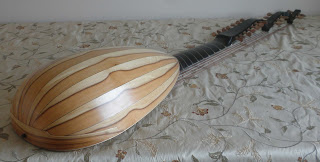 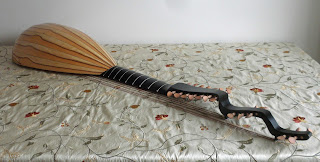 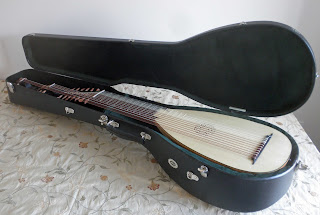 This is the latest creation based on the Maler (MI54) and the extended neck of the "Swedish theorbo" Elg (M220) c.1729. Comfortable and lightweight, powerful and rich basses, the body being shallow and fits the pre-existing case (c14.2 cm  deep) the string length is 70.2/92/107cm can be string as a 13crs as seen or as a 16crs angelique with extra holes in the bridge and groves in the nut. Ribs are in grade two English yew wood, reused/restored Alpine spruce soundboard, bog oak fingerboard, ebonised maple neck and ebonised pearwood extended neck, bridge and endpin, natural pearwood pegs, CD Basses and NNG octaves and fingered courses. The case in a Kingham ex stock black exterior and Green velvet interior. The Maler/Frei Angelique previously made sounded nice so this time the neck was made a triple pegbox, rather modern looking for it's time and thus quicker to make reducing costs but a recent purchase of a triple pegbox by a well respected professional player helped make this the choice for the extended neck, the bases seem as powerful as longer necked italian theorbo.

Hear it being played here: https://youtu.be/-oT1QwyNmNY